Interesting interview re: the collecting of sound 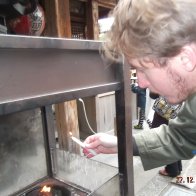 This pdf contains an interview, hosted by Barcelona's MACBA arts foundation, with a sound archivist/compiler/musician called Mark Gergis from San Francisco. He has collected a huge volume of mostly local pop and folk recordings from the Middle East and Southeast Asia, some of which have been released on the Sublime Frequencies label.

Among the most interestingcomments he makes are suggestions that sound collection byacademic ethnomusicologists and commercial recordingsof'world music' both ignore the music that most people actually listen to; thehastily-dubbed cassettesof highlyhybridised/bastardised pop that circulate through these countries. He also suggests that Westerners coming to the musicsometimes overthink their reactions to the music and their'responsibilities'; perhaps a defensive response to the (I think unfair)charges that have beenmadeagainst Sublime Frequencies of exploitingmusicians.I foundit a fascinating read!